Why do dogs wag their tails?

We often think of a ‘waggy tail’ as being a sign of our dogs being happy, but recent research has shown that tail wagging doesn’t purely convey a dog’s happiness. The tail of a dog is a communicative tool that they use to express emotions to other animals, and indeed, us as owners. Vets have been suspicious that wagging isn’t always related to happiness for some time – often at the vet dogs that are notably nervous or defensive will have a wagging tail. This can often be misinterpreted – leading to a very dangerous situation for both veterinary staff and owners alike.

What is the wag about?

Dogs will wag their tail to convey a range of emotions: happiness, nervousness, feeling threatened, anxiety, submission and excitement.

It’s thought that when a dog is relaxed, its tail will sit in a resting position. This position will vary depending on the breed of dog. Some dogs have a naturally curly, stiff looking tail, and others may have a long tail that droops behind them in the natural position. When emotions are evoked, tail wagging then occurs.

Studies have shown that the pace and position of the wag will often convey emotion.

If a dog is frightened or submissive, it’ll often hold its tail down and possibly wag it a little between its legs. We’re familiar with this image of a dog that’s been told off by his owner – looking very apologetic and guilty! 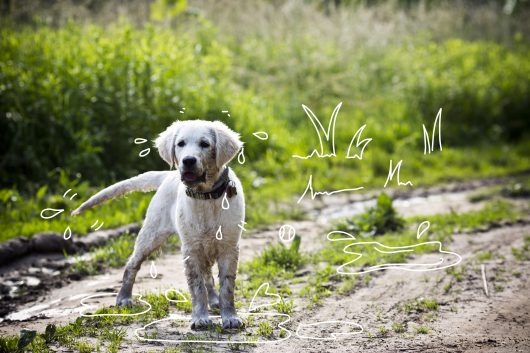 Dogs that are alert or excited will hold their tail higher than the natural position. Often this high tail will be wagging furiously – a fast paced wag will often mean a dog is happy or excited. Again – this is something we often see in the park or when we are playing with our dogs. They’ll often adopt a playful stance with their bottom elevated – wagging a high tail as they ask us to throw a ball or play chase. This behaviour is also seen when we greet our dogs after being out for a long time – they’re telling us they missed us and are glad to have us home!

A curious dog who’s interested in its environment will often hold its tail straight out.

Recent research demonstrates that the direction of the tail wag can communicate complex emotions to other dogs.  By monitoring the behaviour of ‘observer dogs’ who were watching another individual wag it’s tail, it has been shown that dogs convey positive emotions to each other by wagging their tail slightly to the right. On the other hand, more negative emotions are being experienced if a dog wags slightly to the left.

It’s worth remembering that dogs don’t use their tails purely for communication. It’s often used to aid in balance and stability – watching a dog turn at high speed in slow motion can often reveal how it uses its tail for stability. It also acts as a rudder if the dog is swimming in water. It’s interesting to consider if the use of a tail as a communicative means has evolved secondary to these uses, or if dogs tails’ evolved for communication means first!

Finally, the most important thing to remember is that a waggy tail doesn’t necessarily mean a happy or friendly dog.

A wagging tail is simply a sign of a dog interacting with its environment.  It’s always vital to speak to a dog’s owner before petting, as often misinterpretation of a tail wag can lead to a nasty bite! Children are often the victims of such misinterpretation, and so it’s vital we all make sure they’re aware that they must only touch a dog if they’ve been told it’s allowed.

It’s always a good idea to have a dog insurance policy in place. That way, you can have peace of mind that your canine companion is covered in case of unexpected illness or injury.